Essay based on the Taittiråya upanisad

The eighth in the series Cahiers de Présence d’Esprit. 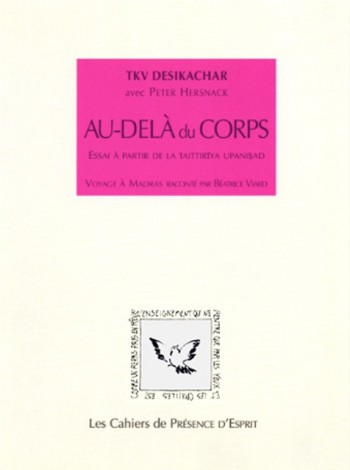 Essay based on the Taittiråya upanisad

The eighth in the series Cahiers de Présence d’Esprit.

“Beyond The body” is a collective work; a transcription by the Présence d’Esprit team of a workshop hosted by T.K.V. Desikachar and Peter Hersnack in Chennai in 2004.

Desikachar presents his approach to the symbolism of the “five bodies of the bird”, proposed in the famous text the Taittiråya upanisad, that Peter then puts to the test through practice.

Five bodies, to encounter within ourselves, in our own bodies, this “beyond the body” that lives within us and that we sometimes manage to experience and embody.

“What must I let go of, abandon at every instant in order to remain available, to be present?” p.21

“Yoga may be defined as the possibility, working with what we are, to take support on what is. If the exhale can simplify the relationship between what we are and what is, the inhale can allow something to open in this relationship.” p.23

“In general, the result of a free relationship between the left and right sides is the opening of perception. Following an exercise of this kind, it is possible to experience vision that is both simultaneously focal and peripheral without contradiction between the two.” p.59

“How do we keep the space open – between experimentation and verification- while we practice? What guides us during our explorations of the relationship between support and breath? The teaching guides us, but it is also by keeping the space in this relationship open that we come to understand how the teaching concerns us. How it can free us. “ p.78

“There is a difference… between two types of exhale. On one we allow the exhale to flow as though to sleep, to die, to say ‘ok’ to let go. On the second, we stay where we are, in the world, … and we allow something to withdraw. This second exhale, … opens a space that allows awareness of the difference between me, here and now, and something else that carries me. This is also the space for the difference between me and them in my relationships with others.” p.139

“If a teaching is communicated from one person to another, it is something of this deep breath that is transmitted. If the words speak to us, it is because there is something in these words, in this breath of life, that transmits a little of the essence of that person.” p.154