The vital points of reference and their play with us

The text presented here is the report of a post-training course given by Peter in Paris, Lyon and Montpellier during the 2013-2014 season. 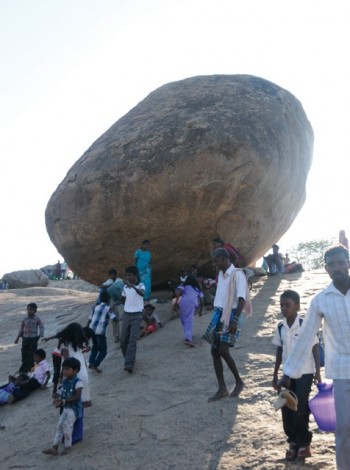 The vital points of reference and their play with us

The text presented here is the report of a post-training course given by Peter in Paris, Lyon and Montpellier during the 2013-2014 season.

Am I able to stand inside my standing pose? Am I able to find free space, a space of possibilities, when standing? 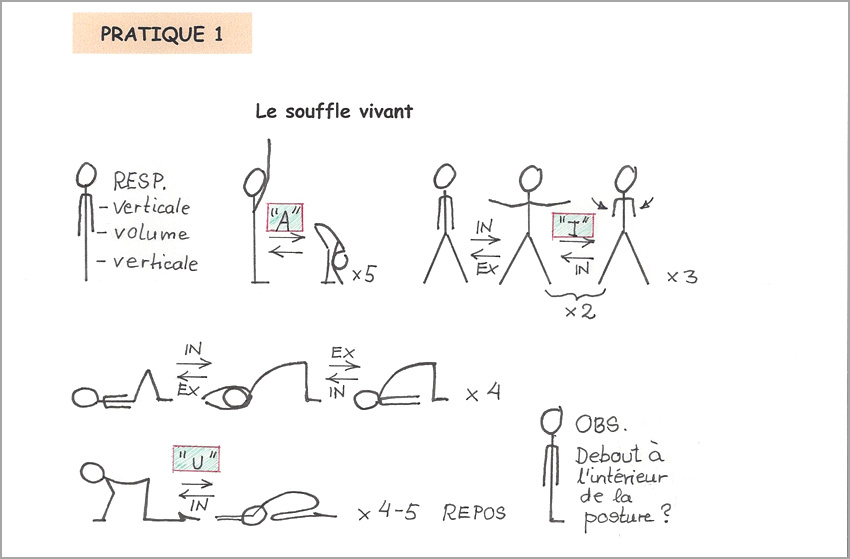 A practice with the intention to be present to ourselves and to feel how the breath supports us from the inside; sound, as a third element, also provides a powerful point of reference for the body-breath relationship.

In this module, our work on the body is an act of service to awareness and to the opening up of a range of possibilities, whilst at the same time looking for the connection, as much as possible, between our lives on and off the mat, between our internal and external coherence, and between our practise and our teaching.

We need space for our living relationships:

We need relationships to

What solutions do we adopt to solve our problems of stability or space?
What criteria can we use to detect them?

These criteria are always relationships, possible connections, which allow us to inhabit our body, giving us a body which is able to imagine and not an imagined body!

This is the challenge of our exploration: to bring to life the interaction between real and imaginary. This is also the foundation of a coherence between our interior and exterior lives.

In order to see something, it helps to see it in relation to something else, which enables us, both naturally and simultaneously to:

Sitting opposite somebody, observe them and try to feel if the diagonal relationships between…

… can be considered more “sitting” or “standing” relationships.

Then see how a simple forward bend, centred on the triangle between the head/atlas joint and the two hip joints, may have a balancing effect between L and R and between front and back.

The stability of the triangle connecting the atlas/head joint to the hip joints allows for freedom between head, torso, pelvis and legs. It is formed between three spaces, which, each in their own way, enable a subtle play between stability and mobility.

The pelvis, shoulder girdle and the entire back are thus able to remain free throughout the movement. 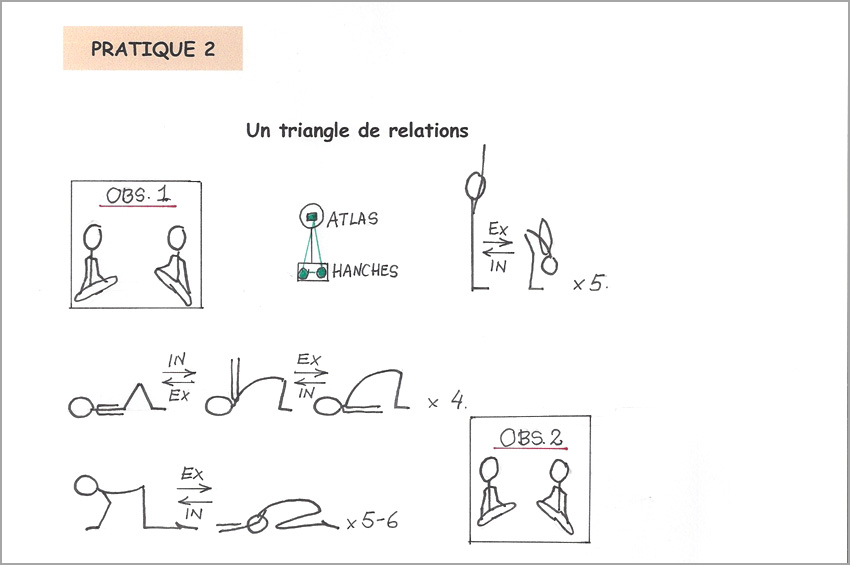 Experimenting with trikonāsana, the triangle, in simple, dynamic and symmetrical poses allows for movements that are both stable and free, enabling a perception of the body in its entirety.

On all fours, observe a triangulation between the pressure on the hands and the spine; open a direct access to the latter and give each point on the spine the role of carrier/carried.

This exploration opens up the relationship between the spaces to the front and to the back of the body. 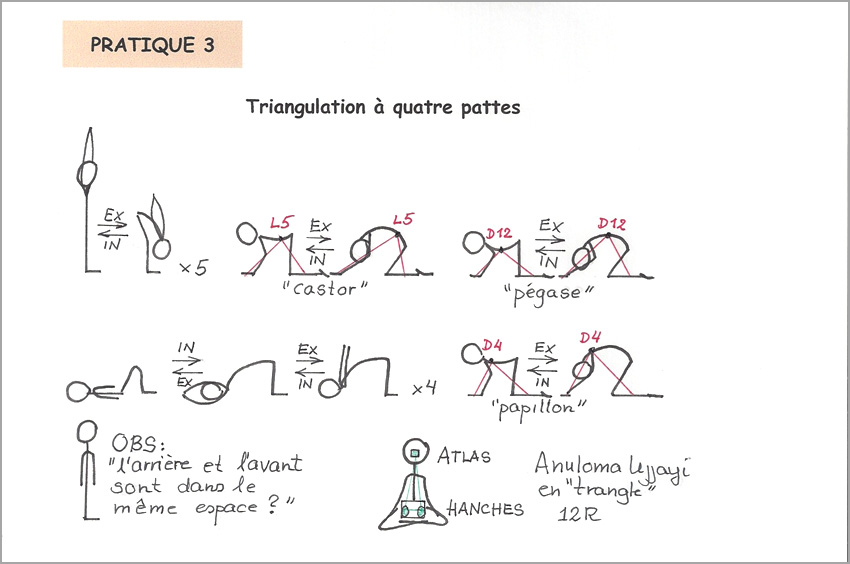 Changing the point of interaction between the supports and different points of the body carried in the spine, transforms the sense of unity in the body and each one of the associated bhāvana :  “Beaver”, “Pegasus” and “Butterfly”, frees up new space within.

Anuloma Ujjāyī, practised within the triangle atlas/hips at the end of the session, helps to integrate these new spaces.

Practising a combination of triangle atlas/hips and the triangulation between supports and different regions of the spine, is a powerful way to discover the different connections possible between stability and freedom. 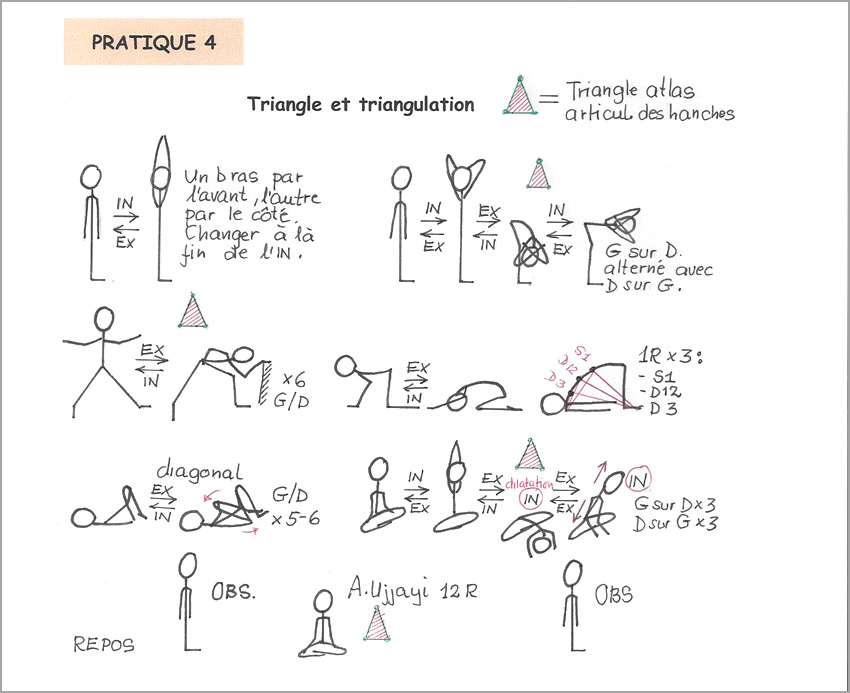 This practise opens up space in the relationship between breath and body. As such, it is an excellent preparation for long periods of prānāyāma.

THE RESPECTIVE ROLES OF THE HEAD AND PELVIS AND THEIR INTERNAL RELATIONSHIP.

With these tools in place, the ground is prepared for a more subtle exploration of:

PRINCIPLE-The head reveals its state via its relationship with the pelvis, and vice versa. 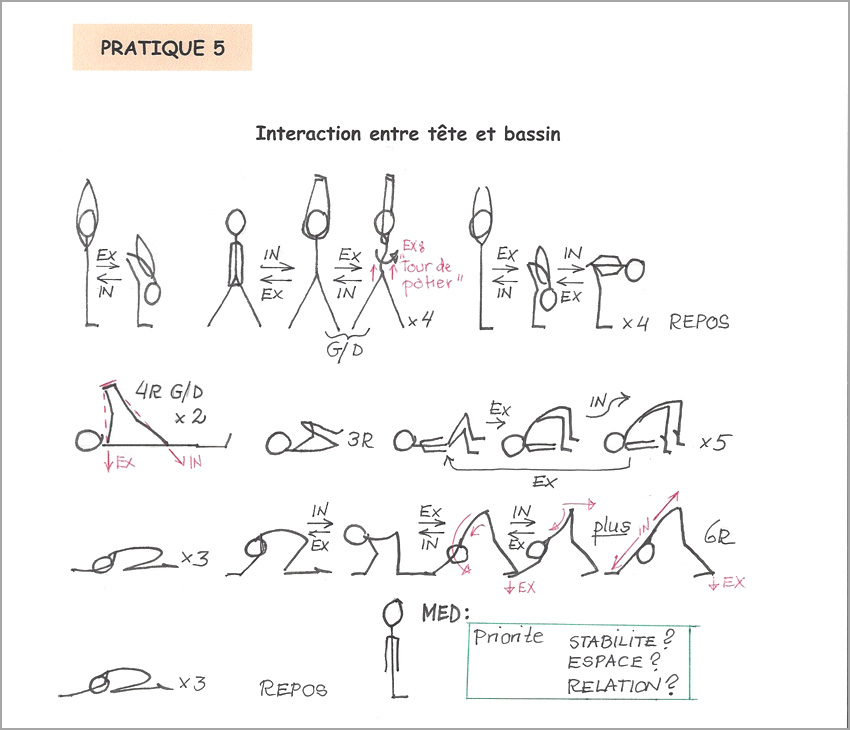 This practice looks to free up both the relationship between head and atlas, and that of the pelvis, between legs and torso.

An initial question-meditation follows: “which of the vital reference points is predominant for me : stability, space, or relationship ?”

THE IMPORTANCE OF FREEDOM IN THE PELVIS FOR A STABILITY WITHOUT CONSTRAINT.

PRINCIPLE-Any action towards stability, if not founded upon freedom of movement between the pelvis and the head, will become tension, a closing off.

In order to understand this, bhujangāsana, the cobra, is, to my mind, a key posture : more than any other posture, it helps restore and reveal the workings of mūla.

This variation of bhujangāsana, helps the pelvis feel stable between the legs and the torso and free in its connection with the floor.

The cobra, practised with one or both knees on the floor, helps open the hips to a direct relationship with the top of the body. This variation makes it easy to observe how efficient it is to “release the sacrum down” and not “release the pelvis down” during the EXP. 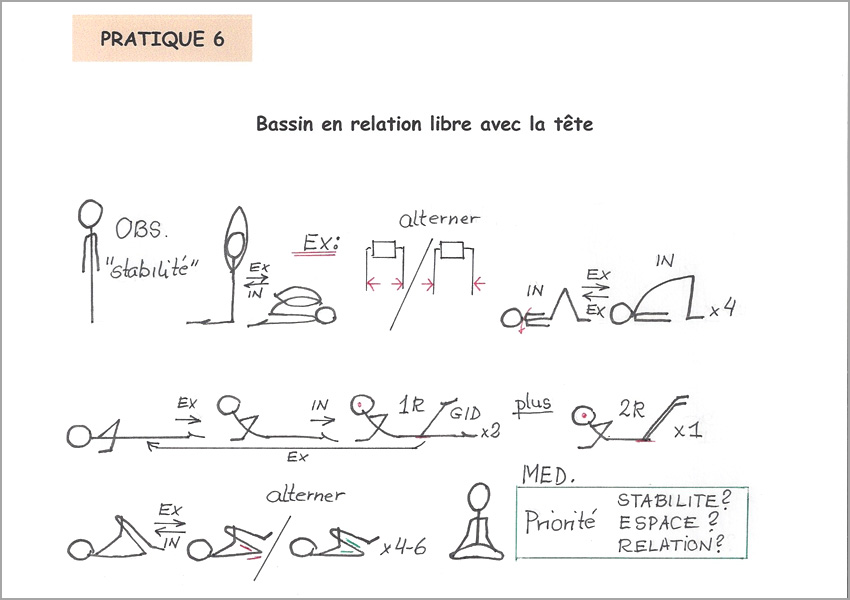 PRINCIPLE-Any action which focuses on space, but which does not use the relationship between head and pelvis as support, creates spaces which are disconnected, do not communicate with each other, or spaces which take up all the space !

Through its interaction with the pelvis, the head frees up the breath as well as ensuring unity within the body.

We can verify this principle through the key pose pascimatānāsana, the seated forward bend. More than any other pose, this one helps create the space for a free relationship between head and pelvis. 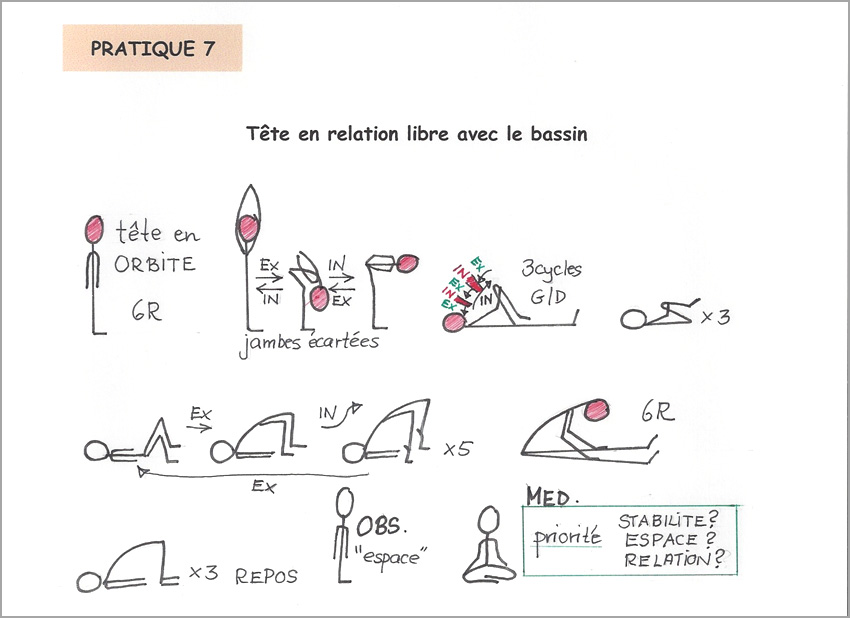 In this short practise around pascimatānāsana (with legs slightly open), both pose and breath are prepared via a twofold work on freedom and stability of the head, and on the psoas.

The practise ends with a meditation on the primary points of reference.

THE IMPORTANCE OF A DIRECT RELATIONSHIP BETWEEN HEAD AND PELVIS.

This relationship expresses itself through the diaphragm, which plays its role perfectly in connecting the two together.

PRINCIPLE-Any action which seeks connection but which is not founded on a free relationship between head and pelvis, cuts us off from the spontaneity of the inner breath.

We can verify this principle using twist poses as the key; more than any other posture, twists are easily able to connect our vital functions together, along the candra - mūla axis.

The twist enables the two to unite in the fire of presence. 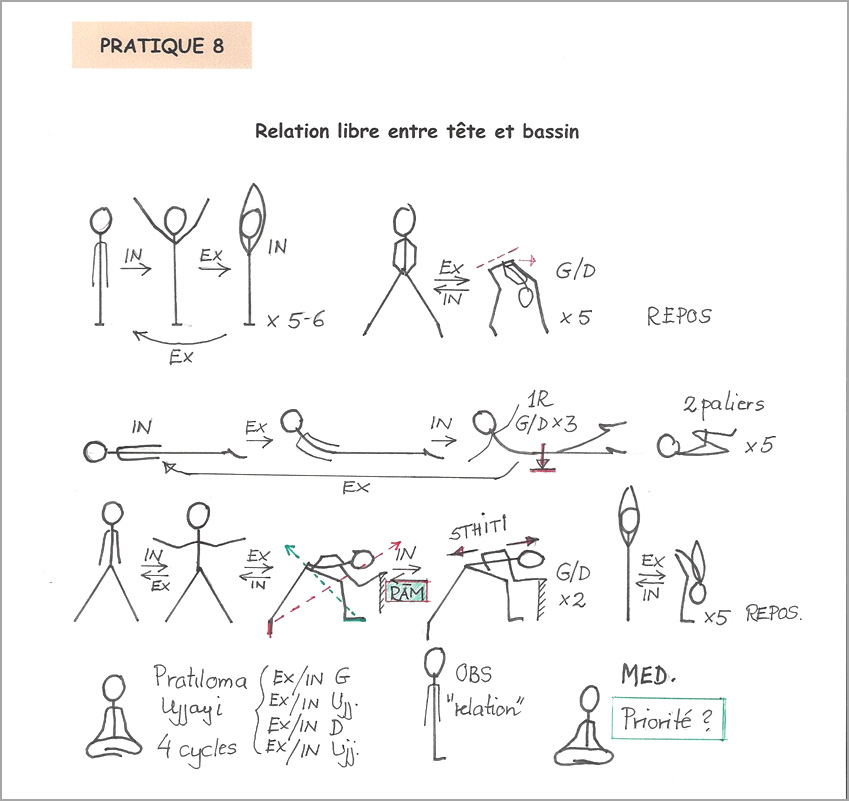 The use of sthiti and the sound RAM in trikonāsana allows for a more intense practice in the diaphragm and in the region of sūrya ; pratiloma ujjāyī breathing can then be used as an efficient way of lengthening the effect.

The practise ends, one last time, with a meditation on the primary points of reference.

In this first module, through postures and breathing exercises, we have explored the fundamental role of the pelvis, head and diaphragm in the interaction between stability, space and relationship.

In playing with the interaction between these three points during the practise sessions and workshops, each participant has come closer to knowing their “primary support”, between stability, space and relationship.

Is there a creative order at work in the relationship between the three? An order, which, independent of our habitual preferences, could open new doors and thus offer us more freedom in our choice of practise and our choices in life?

Do Prānāyāma and meditation help us answer this question?